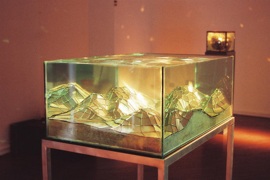 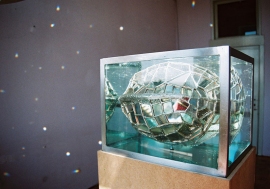 The latest series of works by artist Veljko Zejak denote several significant tendencies in contemporary practices of younger generation authors. These tendencies relate to the process of creation HYPERLINK as well as the character of the final work displayed. Namely, the artist position is increasingly looking towards natural and social phenomena, and the final product is no longer an isolated object that exists on its own, but is rather a flexible structure that is continuously changing.

The piece Nucleus developed as a result of researching the relationship between optics as a science and a work of art. HYPERLINK

In a time where art production employs all mediums available in contemporary technological achievements, Zejak makes inquiries into the possibilities of manipulating and influencing nature (light, water) on the nature of the art object and its manifestation. The reciprocal effect of the object, the nature of the materials of which it consists of and light, create – irrespective of the will of the artists – a new visible form of art. In this case, the space within which the object is placed becomes an intrinsic part of the art object itself, and thus induces interaction. The final manifestation of the artwork is always varied depending on the environment and light within which the piece is displayed. The sculptural approach transmits from the material object to its surroundings, which is indicative of the author’s intent to transform various spaces when exhibiting works both in gallery and public spaces.

The work of Veljko Zejak is a statement to the capacity of the author who already at the beginning of his career transcends local contexts and contemplates within the frames of contemporary production in the development of conceptual ideas as well as in their realization which is, especially in the Nucleus series, technically demanding and requires exceptional skill and knowledge.