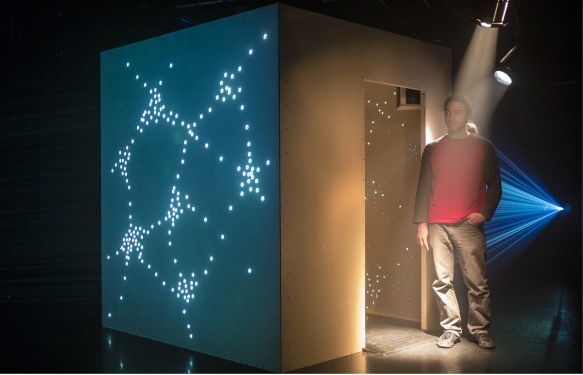 The model for this work arose in 2012 as a suggestion for the exposition in the Henie Onstad Art Centre in Oslu, on the occasion of the anniversary of the bombing attack on the building of the government of Norway and the massacre on the island Utøya. I worked on the ideal basis of the model with the Norwegian artist Lise Wulf. The sound image was composed and animated by the multimedia artist Beno Gec.

The installation approaches the form of a Sensory Theatre, lasts 3 minutes and was aimed for one visitor who enters into the installation individually. The visitor enters into a box 2×2 m, at the beginning he is inserted into the serene atmosphere of a starry sky. The relaxed, meditative and calming ambient is converted abruptly into an uncertain, disturbing environment thanks to the changes in the use of sound and light.

With this work we wanted to put the visitor in a first-hand situation, expose him and leave him there alone. The impression is, of course, additionally enhanced by the fact that he is alone in the whole thing. The installation should not be understood unambiguous as a display of what happened that day in Norway, it can be perceived also universally as an uncontrolled aggression which can happen anywhere and its impact on the man, as a person, who is (without guilt) exposed, left to his fears, internal urges and finally thrown out into the uncertain reality. the name of the work “We live on a star” is ironic and it was overtaken from the name of the tapestry of the Norwegian artist Hannah Ryggen; its dimensions are 3×4 m and it was damaged during the attack on the building of the government of Norway on July 22nd, 2011 in Oslo. 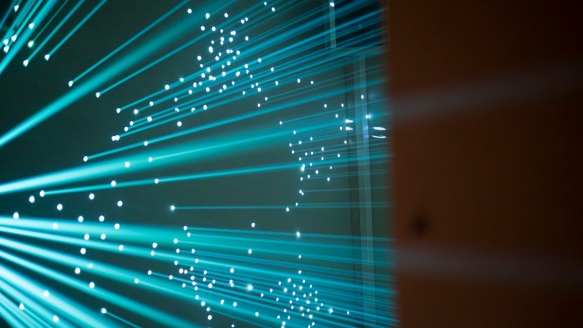